Nafplio is a seaport town in the Peloponnese in Greece that has expanded up the hillsides near the north end of the Argolic Gulf. The town was an important seaport held under a succession of royal houses in the Middle Ages as part of the lordship of Argos and Nauplia, held initially by the de la Roche following the Fourth Crusade before coming under the Republic of Venice and, lastly, the Ottoman Empire. 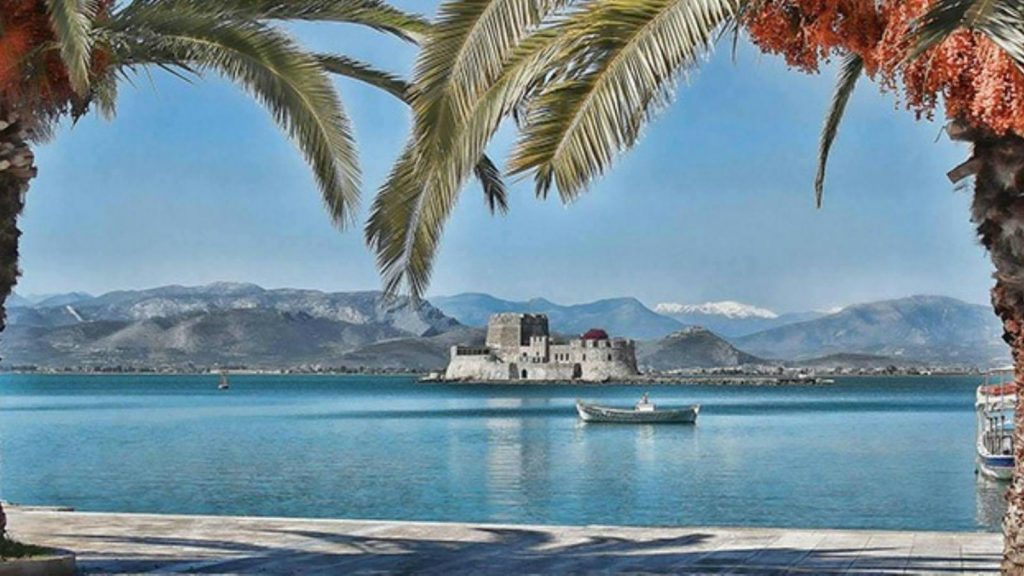 The area surrounding Nafplio has been inhabited since ancient times, but few signs of this, aside from the walls of the Acronauplia, remain visible. The town has been a stronghold on several occasions during Classical Antiquity. It seems to be mentioned on an Egyptian funerary inscription of Amenophis III as Nuplija.

Historically, the city surrendered to the Ottomans in 1540, who renamed it Mora Yenişehri and established it as the seat of a sanjak. At that period, Nafplio looked very much like the 16th century image shown below to the right.

The Venetians retook Nafplio in 1685 and made it the capital of their “Kingdom of the Morea”. The Venetians strengthened the city by building the castle of Palamidi, which was in fact the last major construction of the Venetian empire overseas. However, only 80 soldiers were assigned to defend the city and it was easily retaken by the Ottomans in 1715.

During the Greek War of Independence, Nafplio was a major Ottoman stronghold and was besieged for more than a year. The town finally surrendered because of starvation. After its capture, because of its strong fortifications, it became the seat of the provisional government of Greece. Count Ioannis Kapodistrias, first head of state of newly liberated Greece, set foot on the Greek mainland for the first time in Nafplio on 7 January 1828 and made it the official capital of Greece in 1829.

“Kapodistrias was assassinated on 9 October 1831 by members of the Mavromichalis family, on the steps of the church of Saint Spyridon in Nafplio.”

Nafplio is a port, with fishing and transport ongoing, although the primary source of local employment currently is tourism, with two beaches on the other side of the peninsula from the main body of the town and a large amount of local accommodation. There are frequent bus services from/to Athens (KTEL). Finally, the building of the National Bank of Greece is probably the only one in the world to have been built in the Mycenaean Revival architectural style.